In the heart of the Holy City, the Gibbes Museum of Art launches its inaugural visual arts festival

In the heart of the Holy City, the Gibbes Museum of Art hosts its first ever, week-long visual arts festival, Art Charleston to celebrate creative freedom. A new annual event, this year's theme is inspired by the major spring exhibition organized by the Smithsonian American Art Museum entitled Fighters for Freedom: William H. Johnson Picturing Justice, which premieres at the Gibbes before its national tour. Four key events will anchor the week's activities: the Amy P. Coy Forum (May 9), an introduction to avant-garde contemporary Southern art; Art of Design (May 10), an elegant lunch and lecture featuring nationally acclaimed, floral designer and author, Lewis Miller; the Soirée (May 11), a formal dining and dancing experience with award-winning chefs; and Gibbes on the Street (May 12), a lively culinary street fair experience featuring a host of Charleston's celebrated restaurants. 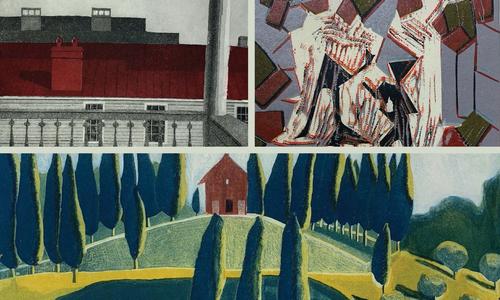 
Society 1858’s annual online art auction will take place May 9 – 13. A selection of donated works of art will hang prominently on the first floor of the Gibbes featuring QR codes to provide immediate access to online bidding. This year, bidders can expect to see two-dimensional objects such as paintings, original prints, drawings, and photographs. Like previous auctions, proceeds will provide critical support to the Gibbes’ vital programs. We look forward to keeping you informed and providing sneak peeks of what’s up for auction in the coming weeks. 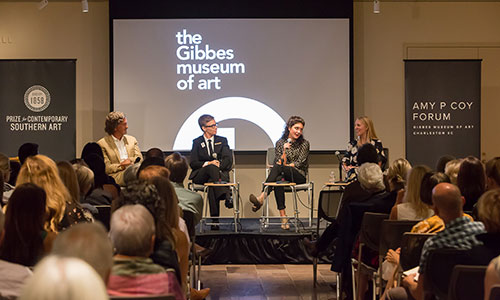 Recognizing the achievements of regionally and nationally renowned artists, while exciting and educating up-and-coming art patrons about the diverse range of objects created in the South, the Amy P. Coy Forum offers stimulating conversation with the 1858 Prize winner for Contemporary Southern Art. Awarded each year by the Gibbes young associates group, Society 1858, the prize and forum recognize an artist whose work demonstrates the highest level of artistic achievement in any media, while contributing to a new understanding of Southern art. 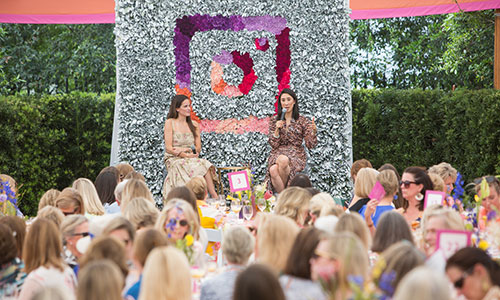 Featuring internationally renowned experts in the world of design, we are pleased to announce that New York fl oral designer and author of Flower Flash and Styling Nature: A Masterful Approach to Floral Arrangements, Lewis Miller, will be our Art of Design guest speaker. Known nationally for his pop-up urban, flower installations, Miller has been called the Banksy of floral design. Clients include Tiffany & Co., Ferragamo, Harry Winston, and The New York Public Library. Miller’s floral inspirations provided hope and gladness especially during the height of the pandemic. He continues to strive in transforming the ordinary into something magical. 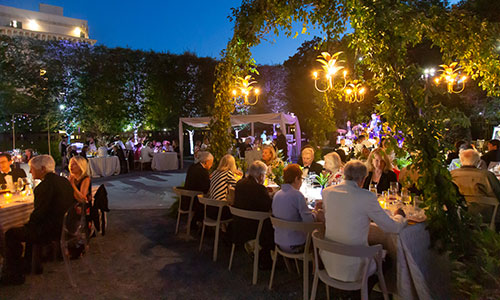 Charleston’s world-class chef’s will explore their artistry through inspiration from the creative freedom expressed in the design and aesthetic of this formal, intimate, fine dining experience. The evening will begin with special behind-the-scenes tours and cocktails in the Campbell Rotunda, followed by an elegant four-course dinner under the magical Lenhardt Garden allée of oaks. Music will fill the evening air and lead to dancing under the stars. 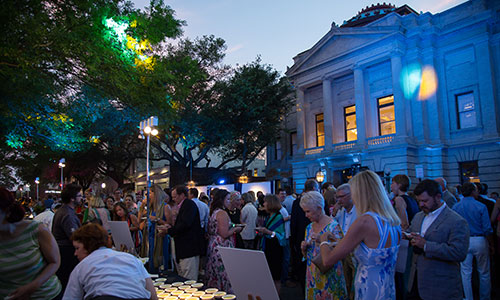 Gibbes on the Street

Meeting Street will again be filled with the aromas, sights, and sounds that are unique to the Gibbes on the Street party. Join more than fifteen of Charleston’s extraordinary chefs, for an evening of live music, open bar and dancing to celebrate the creative freedom we all enjoy under a beautiful Charleston night sky.

Inspired by William Eggleston, explore highlights of Charleston’s historic district and discover the best locations to capture stunning photographs on your phone or camera. Led by local photographer and tour guide Joyce Weir.


The New South and Modern Photography

What defines the “New South,” a term that means something different depending on who you ask? And how are the concerns, appetites, and lifestyles of the “New South” reflected in the work of its emerging photographers? Inspired by the trailblazing color photography of William Eggleston, join Mark Long, co-curator of the landmark 2018 Halsey Institute Exhibition Southbound: Photographs of and about the New South, as we consider contemporary photographic works and perspectives of photographers included in Southbound.

The culture of college and school-life has remained a fascination of the film industry for decades, from 1978’s Animal House to 2014’s Dear White People. In this installment of Gibbes Film in Focus, we’ll explore the melting pot of the collegiate experience and what it really means to get an education. Our first film of the series is School Daze, directed by Spike Lee.

Welcome to the SC LGBTQ Project’s tour of Charleston, The Real Rainbow Row. Initially conceived and mounted in 2014, it was the first step taken by Special Collections in the College of Charleston’s Addlestone Library to begin documenting Lesbian, Gay, Bisexual, Transgender, and Queer life in the Lowcounty and beyond. See the homes of some of Charleston’s most noted LGBTQAI+ artists and writers on this guided walking tour. 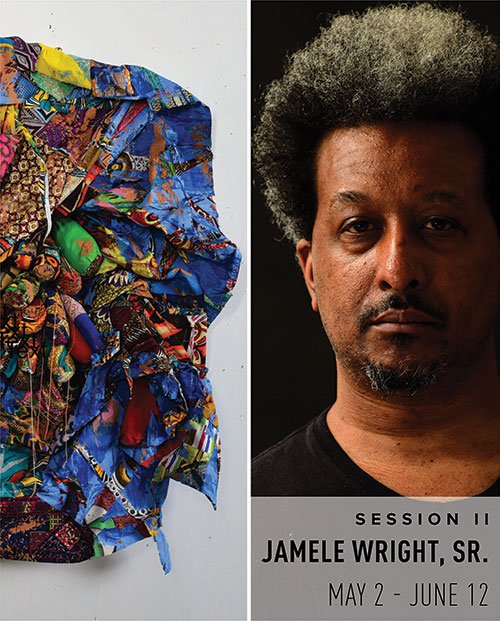 Jamele Wright, Sr. is a multi – disciplinary artist. His work is concerned with the Black American vernacular experience. The work entails collecting and gathering found materials, Georgia red clay, and Dutch Wax cloth. Through art, Wright creates a conversation between family, tradition, the spiritual and material relationship between Africa and the South. His process is influenced by Hip Hop, the way it gathers different cultural influences through sampling. Liken to the music, Wright's work is charged with an energy passed down, then channeled through the Diaspora lineage. The work is inspired by the Great Migration of Black Americans, who left the familiar in the hope of something better.

Born and raised in Ohio, at the age of 22 Jamele Wright, Sr. moved with his family to Atlanta. While raising a family, Wright produced art, jazz and poetry events throughout the city. Realizing that there were many young artists not being represented, he started a gallery called Neo Renaissance Art House. After curating the gallery for over a year, Wright was inspired to pursue his own artistic career. After a number of solo and group exhibitions, the artist graduated from Georgia State University with a B.A. in art history. He concentrated on African and African American contemporary art. Jamele Wright, Sr. graduated with an MFA from School of Visual Arts in Manhattan. He completed a fellowship at Project for Empty Spaces in Newark, N.J. as well as a residency at Hambidge Art Center, Rabun Gap, Ga. He currently maintains his practice in Atlanta. 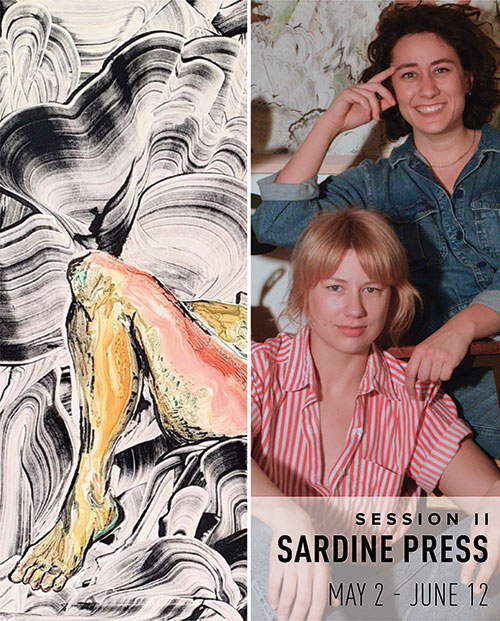 Sardine Press is a collaborative endeavor by the artists Allison Koch and Leigh Sabisch. After years of shared time in shifting social dynamics the two became close and founded Sardine Press. Coming together on this project, the pair realized how their drive for creating art overlaps and intertwines— not only that, but their motivation behind the work they create is unavoidably similar. Expressing themselves in very different ways, they grapple with their need for movement, chaos, and physicality in their work. Koch, explores movement and chaos through the creation of intangible landscapes and spaces; for them, piles of knotted strings or intricate, unplanned patterns do the trick. Sabisch uses the human form to depict twisted faceless figures, intertwined and grasping. The two are always looking for resolution and have found that when they work together, they are able to fill gaps they did not know were there.

Leigh Sabisch graduated from College of Charleston with a double major in arts management and studio art and a minor in art history in 2017, where she met the printmaking technician, Allison Koch. Koch, also a graduate from College of Charleston, received a degree in English literature in 2011 and studio art in 2014. In 2019, the duo founded Sardine Press, the mission of which is to cram their love of printmaking and their satisfaction gained from teaching into a mid-sized RV. Together, the two artists have planned and executed printmaking fundraisers for the ACLU and Planned Parenthood as well as pop-up, hands-on printmaking events. In addition to their own respective studio practices, the two create collaborative works and have exhibited together.