This summer the spotlight is on Philadelphia native, George Biddle (1885–1973). Biddle spent most of his childhood in New England. He went to the Groton School, where President Franklin Roosevelt was a classmate, and received both his undergraduate and law degree from Harvard. In 1911, upon graduating law school and passing the Pennsylvania Bar exam, Biddle left a career in law behind setting off for Paris, France, to study art at the Académie Julian. Over the next five years, Biddle also studied at the Pennsylvania Academy of the Fine Arts, learned printmaking in Madrid, Spain, and spent summers in Giverny, France, to study Impressionism. After serving in World War I, he traveled extensively, going to Tahiti, Haiti, Puerto Rico, Cuba, the West Indies, and France. 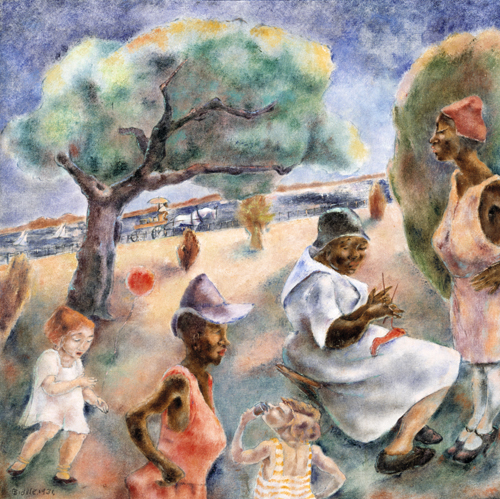 The Battery, Evening, 1931, by George Biddle

In 1928, Biddle traveled to Mexico with muralist Diego Rivera. He spent six months with Rivera, learning the techniques of mural painting and soaking up the social and political ideas embodied within the art of the state supported Mexican School. In 1933, Biddle wrote a letter to President Roosevelt, his boyhood friend, campaigning for a government funded arts program to use as a platform for “expressing in living monuments the social ideals [President Roosevelt] was struggling to express.” The letter was acted on almost immediately and by year’s end the Public Works of Art Project (PWAP) was established—the predecessor of the Federal Arts Project (FAP). 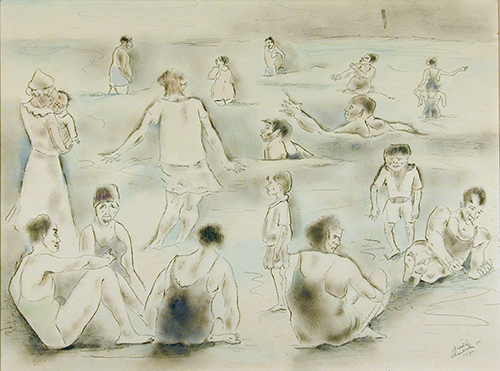 Biddle spent May and June of 1930 in Charleston, South Carolina, sketching a series of illustrations for George and Ira Gershwin, who were then developing the opera Porgy and Bess based on the 1925 novel Porgy, written by Charleston native Dubose Heyward. While Biddle was in town, Heyward encouraged him to explore downtown Charleston and the piers of Folly Beach. During those two months, Biddle created works reflecting the spirit and customs of everyday life and developed a large folio of drawings and watercolors recording the social and cultural landscapes of Charleston.

Works by George Biddle are on view at the Gibbes Museum through September 29, 2013, in the H Gallery.