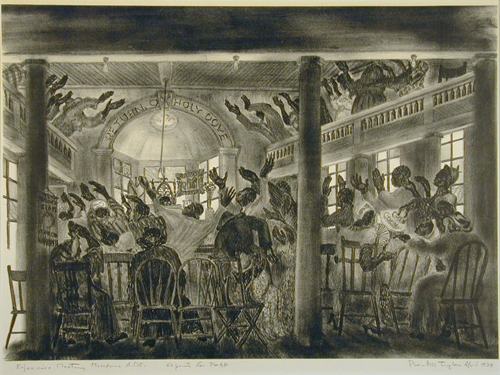 This summer a small exhibition of works by the fascinating American Scene lithographer, Prentiss Taylor, will be featured in Gallery H at the Gibbes. Born in Washington, D.C., Prentiss Taylor (1907–1991) began his art studies at the Corcoran Gallery of Art, followed by painting classes under Charles Hawthorne in Provincetown, Massachusetts, and training at the Art Students League in New York. In 1931, Taylor joined a lithography class at the League and quickly discovered great satisfaction working in this graphic medium, later recalling, “with the first magic feeling of the crayon on the fine grain of the stone, I knew that I was at home in lithography.”* He produced 142 lithographs over the course of his career. 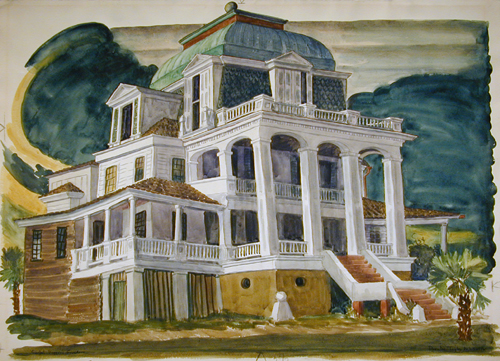 In addition to his interest in the visual arts, Taylor interacted and collaborated with many writers and musicians. His time in New York during the late 1920s and early 1930s coincided with the emergence of the Harlem Renaissance and Taylor was one of a few white artists active in this literary and artistic movement. Among his close friends and collaborators during this period were photographer and writer Carl Van Vecthen, and poet Langston Hughes.

At age twenty, Taylor met Charleston novelist, Josephine Pinckney, at the MacDowell artists’ colony in Peterborough, New Hampshire. Their ensuing friendship prompted Taylor to visit Charleston in 1933; “I arrived on the Clyde-Mallory Line Steamer about the end of May 1933…I was lent the Pink House on Chalmers Street & I was able to stay until Labor Day. I spent most of my time sketching, up one side of the street & down the other.” Taylor returned to the city in 1934 under the auspices of the Public Works of Art Project (PWAP) a predecessor to the Work Progress Administration’s Federal Art Project. He executed numerous prints and several watercolors of Charleston and the surrounding Lowcountry—some for the PWAP and some for himself. He maintained close ties to the city for the remainder of his life.

This exhibition featuring several of Taylors lithographs and watercolors of Charleston will be on view until September 1, 2012.