Since the Gibbes Museum of Art first opened its doors in 1905, contemporary art has been a core component of the museum’s mission. Much of the institution’s beloved historical art collection was, in fact, contemporary when it joined the museum collection. This spring, the Gibbes celebrates our continued commitment to the art of our time with two special exhibitions, John Westmark: Narratives and Beyond the Darkroom: Photography in the 21st Century. Both exhibitions will be on view April 4 through July 13, 2014.

The Narratives exhibition showcases new work by John Westmark, a contemporary artist who weaves imaginative story lines into his large-scale paintings. Westmark explores the human figure in dynamic ways through his innovative use of text and paper sewing patterns collaged on canvas. His paintings depict strong courageous women, some portrayed as stoic martyrs and others as warriors engaged in conflicts of rebellion.

Trained as a painter, Westmark created Abstract Expressionist work in graduate school but was searching for a new direction. One day, he noticed a pattern his wife was using for a sewing project. Westmark was intrigued with the pattern design and the cultural meaning of the pattern itself. He began reading feminist theory and also creating collage studies with the sewing patterns. Over time, Westmark found his artistic direction, combining painting and collage to explore the traditional roles of women, and how those roles have shifted over time. It is no coincidence that his change in approach occurred shortly after the birth of his second daughter. Westmark wanted to create art that had meaning for those around him, particularly his wife and two daughters.

In Westmark’s current body of work, many of the paintings depict women preparing for an impending crisis or conflict. Some women are stoic, some are playful, and others steel themselves for battle. Paintings such as Wave upon Wave and The Tinderbox portray women actively engaged in conflict, fighting to enact social change. Other works, such as Exaltation, show moments of transcendence after the conflict has ended. 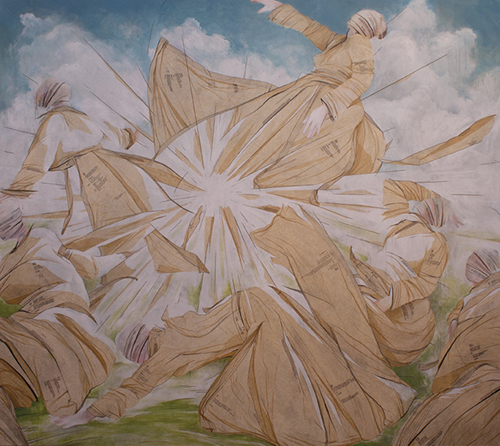 Of this work he writes,

“My intention with “Exaltation’” is to present a scene suggesting a violent event, in this case an explosion. This event functions as the first layer to be peeled away to expose a deeper meaning of transcendence. The figures are not so much victims of a destructive event as they are propelled by the intense energy of white light. They are the beneficiaries of something powerful and unexplained. The sewing patterns are released from the role of containing flesh to fly away,” says Westmark.

With each painting, the narrative is open to interpretation; however, the embedded text offers clues to the implied storyline.

A resident of Gainesville, Florida, Westmark holds a BFA from the Kansas City Art Institute and an MFA from the University of Florida. In 2012, he received the Factor Prize for Southern Art, (renamed the 1858 Prize for Contemporary Southern Art) awarded by the Gibbes to an artist whose work contributes to a new understanding of art in the south.

The Gibbes explores another aspect of contemporary art through the exhibition Beyond the Darkroom: Photography in the 21st Century. Since the invention of photography in 1839, the medium has constantly evolved with the development of new technologies. In the twenty-first century, photographic processes have shifted from the darkroom to the digital world, bringing new possibilities to the medium. Beyond the Darkroom examines a variety of photography-based works acquired over the past ten years for the Gibbes Museum’s collection. Ranging from the text and photo-based works of Carrie Mae Weems to the digital montages of Stephen Marc, this exhibition showcases the great innovation in photography today.

A great example is Botany Bay Plantation Boardwalk by Atlanta-based artist John Folsom. Trained as a photographer, Folsom begins his mixed-media landscapes with a photographic image. Using digital software, the image is then divided into a grid and printed on separate panels. The panels are then attached to a large wooden panel to create a unified image. However, the grid remains visible as a reminder that the image is a construction of the artist’s making, not an objective representation of nature. Folsom pushes this idea further by working the surface of the image with oil paint and sealing it with a wax medium. The technique gives the surface of Folsom’s work a rich patina that suggests the layers of history accumulated in the Lowcountry landscape. 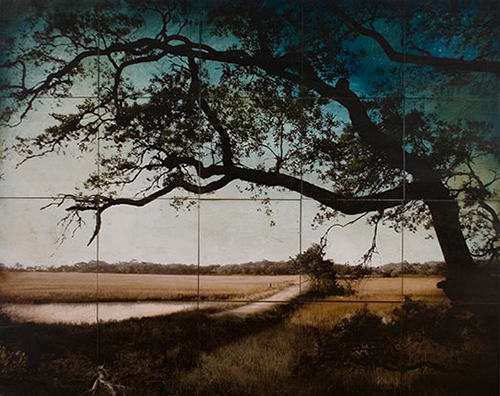 The connection between past and present is an underlying theme of Beyond the Darkroom. The introduction of the exhibition offers a history of photographic processes, including early works from the Gibbes collection. An antebellum daguerreotype, late nineteenth-century albumen prints, and early twentieth-century stereographs give context to the remarkable contemporary works on view. By combining the old and new, Beyond the Darkroom highlights a great strength of the museum’s collection—to engage people with the past while building an appreciation for the present.

John Westmark: Narratives and Beyond the Darkroom: Photography in the 21st Century, are on view at the Gibbes Museum of Art from April 4–July 13, 2014. Visit our online calendar to find programs and events related to these exhibitions.