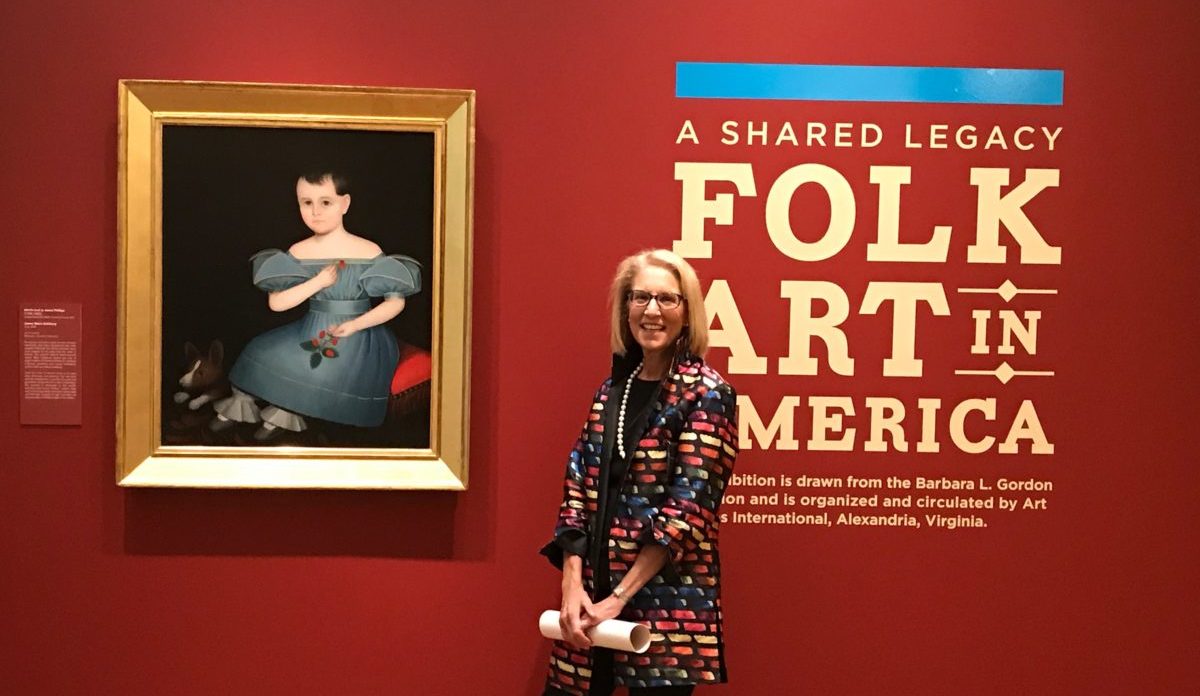 Throughout the thirty years that I’ve been collecting, I have tried to accumulate the best in category, the rarest, and the objects that represented the true American work ethic.

It’s something that I grew up with in my family—hard work trumps all. I can just envision each of the artists—whether it’s the carousel carver, the women and men who made the small boxes in my collection, or the painters sitting at their task until they reached perfection—no matter how many obstacles had to be overcome or how much hard work it required, they had a vision they wanted to achieve.

People ask me how I came to collect American folk art. I think the seed was planted when my seventh grade class traveled from Cleveland, Ohio, to Colonial Williamsburg, where I first saw the Abbey Aldrich Rockefeller Folk Art Collection. I majored in Art History at Cornell University and even took some graduate courses in Art History, but when it was time to make a career decision I ultimately went to law school. 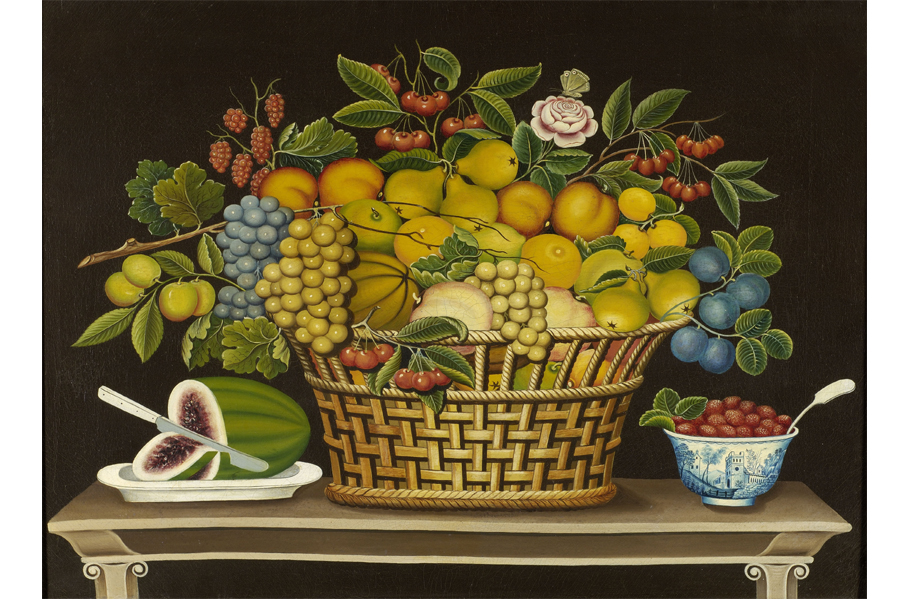 My husband, Steve, and I were well into our legal careers when we finally had the means to start collecting art. Around 1990, I walked into the exhibition room at Sotheby’s for fun and saw the Berenholtz collection, the most amazing collection of American Folk Art and early American toys. I was hooked. I began to collect Folk Art fast and furiously. I would leave the Justice Department at five o’clock and drive an hour out to a country auction in Boonsboro, Maryland. I amassed all sorts of—what I thought at the time were—wonderful objects. When the objects began to crowd my house and garage, I finally decided maybe it was time to winnow down. By then, I had also been flying around the country to prominent Americana auctions and had met some dealers in the field. I approached David Wheatcroft of Boston and told him that I wanted a collection like Abbey Alldredge Rockefeller. I asked him if he would look at my collection and tell me which of my fabulous objects I should keep and which I should sell in order to create a truly great collection. He obliged and after a quick tour, asked me “Do you really want to know my opinion?” With some trepidation, I replied, “Yes.” He responded, “I would sell it all and start over.” This was about 1994 and we did as David advised. He brought a huge truck to Richmond, Virginia, and we packed up everything. He took it to Sotheby’s in New York City and somehow convinced Nancy Druckman, their director of Folk Art, to take objects in for auction. To this day, I’m not sure how he did it, as many of the objects did not meet their minimum requirements. After that, I began working with David, who constantly reminded me to “stay disciplined, Barb.” Over the past twenty years or so, we have worked hard trying to find the best, most wonderful pieces of Folk art, all the while considering condition, surface, rarity, and, of course, beauty. It was hard work, but it was like anything you truly love—I’ve never had more fun.

The other question that I am often asked is, “Has this been a joint effort with your husband, or have you built this collection all on your own?” When I first got the idea to collect, we were in Washington, DC, and I took Steve to an auction with me at Weschler’s downtown. I was bidding on a drawing by Rockwell Kent which sold for about $400. I raised my hand and he started pulling it down saying, “Are you sure? Are you sure?” After that, I never took him to another auction. One thing that he always says about me is that I may be right and I may be wrong, but I am never in doubt. And isn’t that just what you need at auction? Nerves of steel and quick decision-making.

While Steve wasn’t directly involved in the collection process, he has tirelessly supported me in whatever I have done. Though not all of my decisions were the best, his encouragement and trust have never wavered. I will say, on the day that the stock market fell—October 8, 2008—his devotion was tested. I got a call from David Wheatcroft who said, “Barb, there’s a great Peaceable Kingdom painting coming up at auction and I think we can get it—do you want to go for it?” Now mind you, to me, owning a Peaceable Kingdom by Edward Hicks had always been the ultimate unit. I believed that this would complete my collection. Everyone in my family knew that I slept with a tiny reproduction of it next to my bed. So, despite the dire predictions that day of doom and gloom, my husband said, “Go for it.” If you look at many of the great collectors of American Folk Art, many were women and most had unbelievably supportive husbands. I know that I am very thankful for mine! 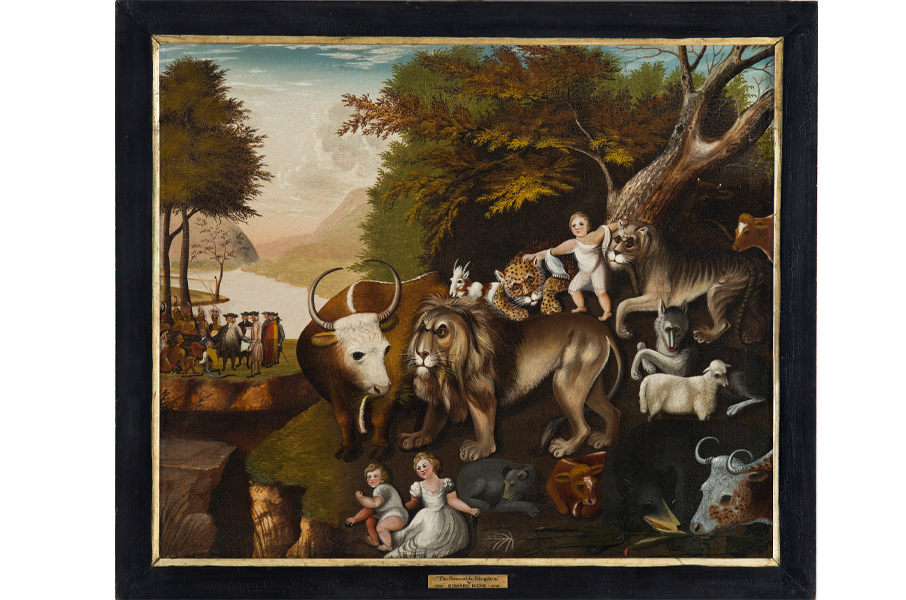 Recently, I was speaking with David Wheatcroft, and he told me, “You’re not the only person I told to sell their whole collection and start over. But you’re the only one who actually did it!” I’m thrilled that with David’s help, and a lot of time, patience, and discipline, I have cultivated the collection that you will see in A Shared Legacy. I am thrilled to partner with the Gibbes to help bring you this exhibition and I hope that you enjoy the collection.

A Shared Legacy: Folk Art in America is on view at the Gibbes from January 19, 2018–April 15, 2018. Barbara Gordon will give a public tour of the exhibition on Friday, January 19 at 2:30pm. The tour is free to members and free with Museum admission.

Top Image: Folk art collector Barbara Gordon at an opening of A Shared Legacy at the Cincinnati Museum of Art. 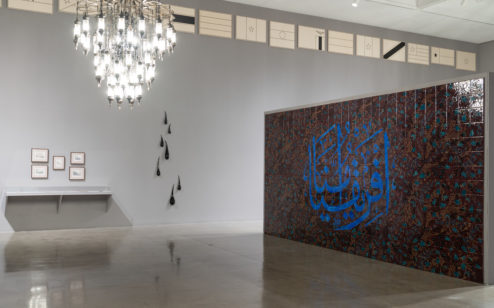