Ogden Pleissner and the Art of Sport in the Lowcountry 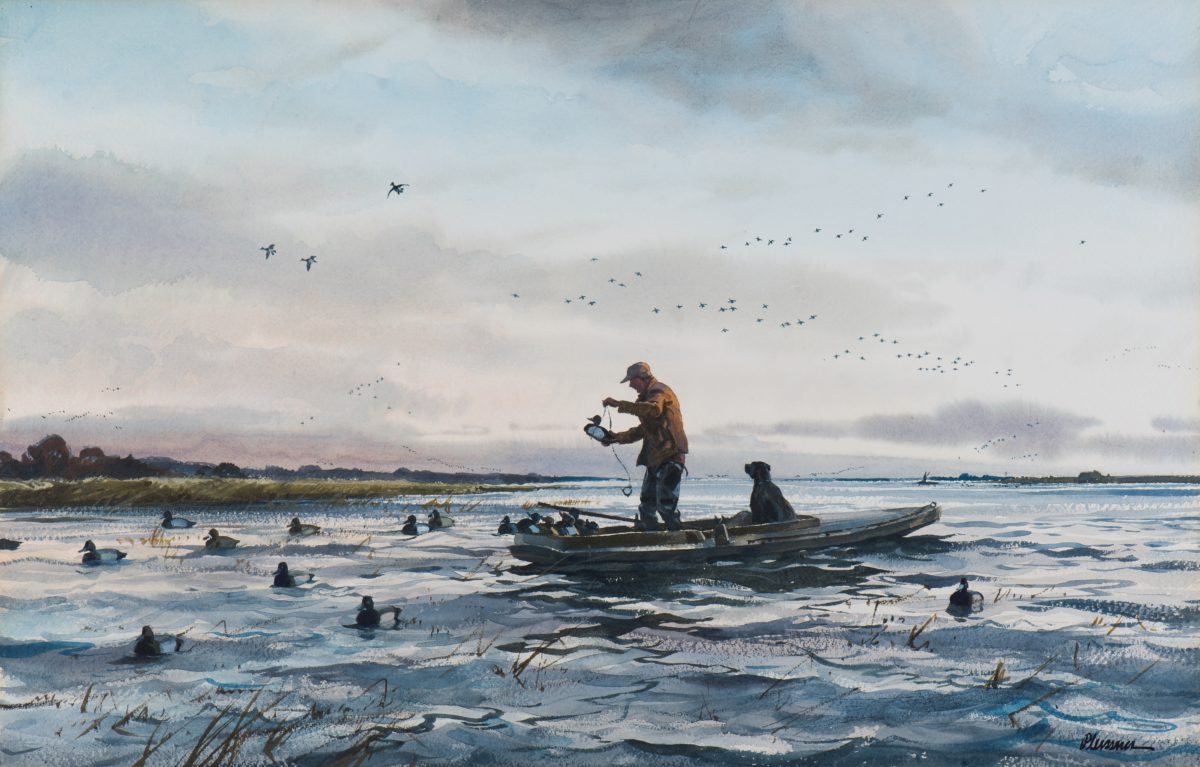 During the early years of Ogden Pleissner’s career, the South Carolina Lowcountry became a favored sporting destination for members of America’s upper classes. As industrial wealth fueled interest in genteel sport, monied elites took to the great outdoors, convinced of the physical and psychological benefits of vigorous recreation and the rejuvenating influence of nature. Coastal South Carolina became one of a number of destinations favored by dedicated sport hunters. At sprawling estates scattered throughout the region, wealthy men and women passed their days hunting, riding horses, socializing, and enjoying mild winter weather. By the early 1930s, the Lowcountry drew widespread attention for a vibrant sporting scene that attracted some of the wealthiest and most prominent people of the time.

The basis of the new sporting scene lay in a network of “plantations” devoted to leisure. Northern sportsmen’s interest in the Lowcountry dated to the 1880s, when small numbers of men began traveling to the region during the fall and winter months to hunt ducks, quail, and other game. Over time, northerners’ activities expanded, and some developed an appetite for refinement. By the World War I era, some spent the better part of the winter in the Lowcountry, usually with their wives and children. During the 1910s and early 1920s, northerners pioneered a number of approaches to remaking former rice and sea island cotton plantations for leisured use. Refurbishment of existing buildings, restoration of colonial and antebellum houses, and the creation of landscaped grounds and gardens figured in a repertoire that turned former slave plantations into sites of upper-class performance and display.

The tipping point in northerners’ activities came in the mid-1920s when interest in the Lowcountry suddenly exploded. Land sales increased dramatically, and northerners began approaching estate-making more deliberately. Stately houses, neatly kept outbuildings, and opulent landscapes became the norm. So, too, did palatial landholdings. Although some “plantations” occupied as few as 500 or 1,000 acres, many encompassed 5,000 or more. Some exceeded 20,000. In many cases, new owners consolidated multiple tracts while retaining the historical name of the plantation where the dwelling they used as their residence lay. In this manner, age-old plantation names gained new life as titles of elegant sporting estates. 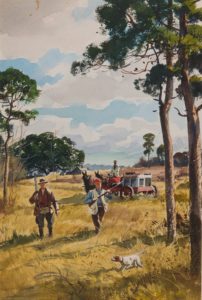 The men and women who spent their winters in the Lowcountry relished the same moments that Pleissner celebrated in his paintings: ducks alighting from a marsh at sunrise, the chill of a crisp fall morning, trained dogs catching a scent, the moment of steady aim just before pulling the trigger. For upper-class Americans of the era, hunting meant more than recreation. It proved self-worth, discipline, and physical and mental strength. It challenged people living lives of comfort and convenience to test themselves under conditions that had changed little over time. Tradition, unspoiled nature, and the human drive to assert dominance over wild animals combined to create invigorating experiences requiring skill, stamina, and nerve.

Understanding what the Lowcountry’s new breed of plantation owners saw in the region and what they prized about their experiences offers insight into the scenes Pleissner depicted in his paintings. Although Pleissner painted relatively few lowcountry scenes, the men and women who owned lowcountry estates belonged to an elite who traveled widely. As many historians have observed, upper-class Americans of the early twentieth century lived “peripatetic lives.” Many spent their summers on Long Island or in the Berkshires, then moved south to the Carolinas, Florida, or the Caribbean when the weather turned cold. Others summered on the coast of Maine or in Europe and spent their winters in the West. Wherever they went, hunting figured among their preferred activities.

When Pleisener depicted hunting and fishing amid spectacular scenery, he contributed to a well-established visual idiom. Sportsmen and sportswomen everywhere had no difficulty identifying with his work. Some owners of lowcountry estates had hunted grouse in the Scottish Highlands, and others had shot big game in Africa. Most had hunted in the Adirondacks. Others also hunted in the West, in the Red Hills Region of south Georgia and northern Florida, and on the duck marshes of the Chesapeake. Many also collected sporting art.

Pleissner certainly knew of the Lowcountry’s burgeoning sporting scene. In the years when he taught at the Pratt Institute (1930–34) and the National Academy of Design (1935–37) in New York City, national newspapers and magazines lavished attention on the “rich Yankees” who had turned old plantations into handsome retreats. Life, Country Life, Fortune, and House Beautiful all ran features on northern-owned estates and the activities their owners and guests enjoyed. As Pleissner became one of the nation’s leading producers of sporting art, lowcountry estates increasingly shaped perceptions of “good sport” and the ideals it embodied.

-By Daniel Vivian, guest blogger, author, and Associate Professor and Chair of the Department of Historic Preservation, College of Design, University of Kentucky.

Dr. Vivian will participate in the Ogden Pleissner Symposium at the Gibbes Museum on January 18th at 10am. A book signing of his book, A New Plantation World: Sporting Estates in the South Carolina Lowcountry, 1900 – 1940, will be held after the symposium.